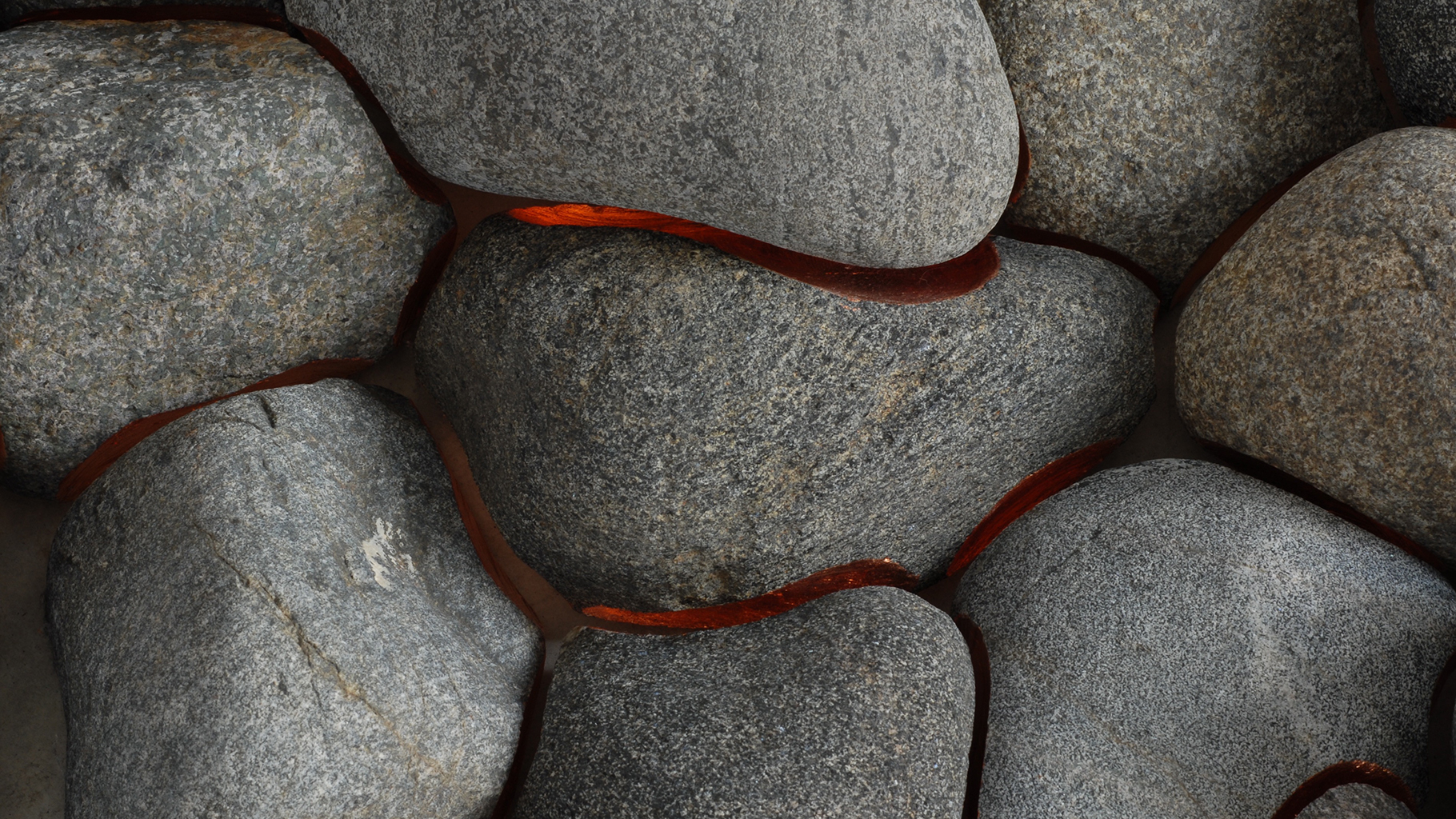 Liminal sites, such as shorelines that mark the threshold between opposing elements of water, and the earth and sky – like liminal states of beings, as in the dream between sleep and awake – are spiritually active places. In the Anishinaabe world view, the universe is understood to be comprised of layers. Divided into contrasting upper and lower worlds and zones of power, this tiered cosmos is animated by the ongoing and reciprocal interaction of beings and persons both natural and spiritual.

The sky is home to animikiig – the thunderbirds, ancient manitous – or spirits – whose powers manifest in the rainfall, flashes of lightning, and the sound of thunder; while their counterparts, mishibizhiig – the underwater panthers – reside in the lower realms of water. With lynx-like bodies, metallic scales, horns, and the tail of a serpent, mishibizhiig rule the lakes, rivers, caves, and deep crevices in the earth. The two were great enemies, it would seem, as many of our stories detail their ongoing conflicts that occurred along shorelines, particularly those surrounding gichigami – Lake Superior. To be sure, the landscape of this region is imbued with their encounters as natural red copper – believed to be the blood of the two manitous – can be found in abundance throughout the territory. Yet, despite their discord, animikii and mishibizhiw are an inherently interconnected reciprocal pair, and the one cannot exist without the other.

It is through the careful balancing of opposing powers at threshold or axis sites that the multi-layered Anishinaabe cosmos remains in continuous motion. In his solo exhibition mskwi•blood•sang, Michael Belmore subtly acknowledges the power that exists in spaces, sites and states of being in-between. As a life-giving substance, mskwi – blood – flows freely between the realms of water, earth, and sky, embodies the continual interplay of the landscape’s contrasting forces.

The installation Convergence (2013) is the culmination of two works: Placid (2011) and Flux (2010). Coalescing to evoke the recurrent memory of standing on the rocky shores of Lake Superior as water crashed against the bank, the work makes permanent the ephemeral lull that exists between waves at the moment the water recedes, leaving behind traces of dancing foam. This persistent and cyclical gesture of water is reflected in the rounded stones, their very shape and form tumbled, smooth and rendered by the undulating waves. As a complementary pair, Placid and Flux echo the natural and steady rhythm of the calm and chaos of the Lake Superior shoreline.

The stones are meticulously carved and appear to interlock seamlessly, yet, at the points of their near-meeting, the artist has applied a fine lining of brilliant copper leaf, reflecting the natural copper veins that surround Lake Superior. The lining forms exquisite links, delicately connecting the stones into intricate patterns. Together with Peal of Thunder (2017), this installation raises questions of value and also considers the precarious and fragile nature of working the land. Though resilient, the land and water are – like copper – malleable and easily marked, whether form a calculated or incautious blow. Referencing careless activity and resource extraction in Anishinaabe lands, Peal of Thunder acts as a reminder of this delicate balance and contingency.

For the Anishinaabe, native copper is cherished for its literal and figurative reflective properties. As well as being the substance of life for the manitous, it is a material that shines and is believed to be “good to think with,” as it brings about clarity of mind. Copper shares this quality with other good and powerful light-emitting entities like the sun and fire, which offer warmth, comfort, and nourishment. In the sculptural work, Investment (2012), the arrangement of the fitted stones inlayed with glowing copper evoke the smouldering coals and embers of a dimming fire, and capture a moment of quiet thought and introspection.

This sense of clam and comfort is likewise offered through the caring nature of animikii and mishibizhiw, and the elements derived from their bodies and power. Indeed, these spirits could be very kind to humans, and many Anishinaabek often sought their favour and protection. Looming overhead is the installation Grotesque from the Eastern Woodlands (2005), resembling a stone gargoyle from medieval architecture. As ancestor Anishinaabe artists would paint narrative images of underwater panthers and beings on cliff faces along the shoreline, so too does this carved figure preside and guard over what lies below.

mskwi•blood•sang makes visible the animacy of the multi-layered Anishinaabe landscape. By ensnaring brief moments of cyclical time, Belmore re-envisions the interwoven power of the in-between and presents a confluence of contrasts which articulate the tension, continual flux and steady pulse of the Lake Superior shoreline.